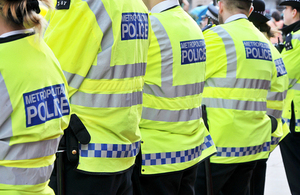 The government is investing more than £100 million of the Police Transformation Fund (PTF) in projects designed to prepare police forces to adapt to the challenges of the future.

The Home Secretary has approved up to £70 million for investment in 2018/19 in four national major police-led programmes covering forces in England and Wales and to manage the portfolio of projects to ensure maximum benefits are shared among forces.

The programmes will transform how police use technology, make it easier for the public to engage with police online, and boost capacity to deal with major threats.

Altogether this will help support the police in preventing and combating existing serious crime and being better equipped to deal with new types of crime.

"Criminals don’t stand still, and neither should our police forces. We’re determined to support police leaders in creating a modern, agile and responsive police service.

"The Police Transformation Fund is delivering real change in policing, and this new funding will continue to help forces improve efficiency and tackle threats like serious and organised crime."

The four police-led national programmes, which are already underway, include:

• The National Enabling Programme: this will deliver a unified IT system across policing and deliver more joined-up working within and between forces. In Cumbria, for example, cloud-based note-taking technology allows officers preparing to question suspects in custody to view real-time information from victim interviews being conducted by other officers elsewhere, improving the response offered to those affected by crime.

• The Digital Policing Portfolio: this aims to improve police’s use of technology, including by creating a single online hub. The hub allows members of the public to report low-level incidents – such as minor road collisions – online rather than having an officer manually record the information at their local station, providing a better service to the public and improving efficiency for the force.

• Transforming Forensics: this will improve how biometric services and digital forensics are used, including the development of a 24/7, faster, fingerprint identification service.

The national programmes are expected to deliver cash savings, as well as improving efficiency by, for example, freeing up officers for frontline policing roles. Funding will be released in stages to the programmes subject to progress in delivery to provide ongoing assurance of this major investment.

The fund was launched in May 2016 and aims to help police respond to changing crime and shape policing for the future.