Millions of road-users in the South West are set to enjoy safer, quicker and easier journeys, as a multi-million-pound package of improvements to roads, pavements and bridges across the region is revealed 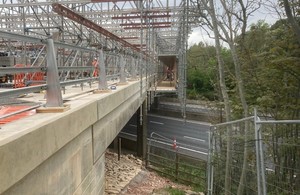 National Highways’ £167 million investment will ensure safer, quicker and easier journeys for motorists across the region, including schemes like the M5 Staverton Overbridge works

The announcement comes as the Government continues its drive to level up transport in regions right across the country, investing in vital infrastructure and boosting both connections and local economies as we build back better from the pandemic.

Well-known motorways and major A-roads including the M5, M4, A40, A36, A303, A30 and A38 are all included in the planned package. Motorists, pedestrians and cyclists are all set to benefit from the planned works, which include road resurfacing, bridge joint replacements, the creation of cycle lanes, improved signage and landscaping.

"Hundreds of thousands of drivers use our roads every day for work journeys, home deliveries and the movement of the goods and services, so it’s essential we keep them in a good condition to ensure safety and reliability.

"With this investment, National Highways will continue to deliver the essential maintenance and upgrades throughout the region to improve safety and help keep drivers on the move."

National Highways will begin work on its comprehensive maintenance programme in the coming weeks, with schemes including:

This latest investment into the region’s roads follows on from last year’s essential maintenance programme which saw National Highways pump £200m into the completion of 121 road renewal and maintenance projects.

Over the past 12 months, National Highways resurfaced 277 lane km (172.1 miles) of motorways and major A-roads in the South West, using 221,177 tonnes of resurfacing material.

A further 84,948 road studs were laid to help light the way for drivers, 77kms (47.8 miles) of safety barrier were renewed, with 23kms (14 miles) of drainage improvements to reduce carriageway flooding and 36 new bridge joints.