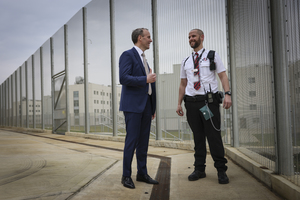 Britain’s first ‘smart’ prison has opened today (4 March 2022) – where an unprecedented array of workshops will drive more offenders than ever into jobs and away from crime in a boost to public protection.

The new Category C prison in Northamptonshire is the first jail to have been designed with education, training and jobs for prisoners on release as its main purposes – factors proven to cut crime and reduce reoffending.

There will be a new presumption that prisoners at HMP Five Wells should spend their time behind bars learning new skills and getting trained in vital industries so they can find work immediately when back in the community and plug local labour shortages.

With 24 workshops and a large number of classrooms, prisoners will take part in formal learning, courses, qualifications and on-the-job training in areas including coding, car maintenance, fork-lift-truck maintenance, plumbing and engineering.

The prison will also be smart in how it supports prisoners with drug addictions into clean living, with two special drug recovery wings with a focus on abstinence-based methods. Here, up to 200 offenders with substance misuse issues will take part in a 16-week programme to help them get off drugs and into permanent recovery.

"HMP Five Wells is a flagship example of this Government’s plan to create secure and modern prisons that cut crime and protect the public.

"From drug-recovery centres that employ abstinence-based treatment to world-class prisoner training courses, this smart prison is designed to tackle the key obstacles to cutting reoffending and making our streets safer."

At HMP Five Wells, the Deputy Prime Minister met with frontline prison staff to see first-hand the cutting-edge new technologies and workshops that will keep the public safe while supporting prisoners to turn their backs on crime for good.

The prison will hold around 1700 offenders when at full capacity in December and will boost local employment with over 600 new jobs for the community. Around 200 prisoners are already there.

The opening of HMP Five Wells is a major milestone in the government’s commitment to create 20,000 modern, innovative places by the mid-2020s.

The new jail, on the site of the old HMP Wellingborough, is the first of 6 new prisons to be completed, with construction at Glen Parva, Leicestershire, well underway. The 1,700 place prison, recently named HMP Fosse Way by the local community, will be operated by Serco following a recent tendering competition.

The next new prison will be built next to HMP Full Sutton, East Yorkshire, and locations are being identified for a further three across the country. Of the four final builds, one will be run by Her Majesty’s Prison and Probation Service and three by private operators.

Together, this £4 billion investment will create thousands of jobs for local communities and see millions invested in local roads and infrastructure, while rehabilitating thousands of offenders and keeping the public safe.