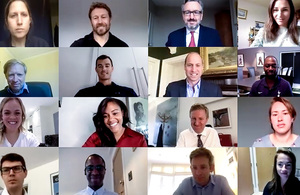 The Culture Secretary and The Duke of Cambridge have joined some of Britain’s biggest sport stars to discuss the issue of mental health across UK sport, as elite athletes and many of the wider population return to work following an easing of lockdown restrictions.

The virtual roundtable saw Oliver Dowden and The Duke joined by British sporting greats who together have accumulated more than 400 caps for their country, 17 gold medals at Olympic or Paralympic Games, seven grand slams, and won a Davis Cup and Rugby World Cup.

Many of those who attended spoke about their own personal experiences and how maintaining good mental health helped them be better athletes. Drawing upon their careers and work in sport, broadcasting and charities, the discussion was an opportunity to share perspectives on the barriers that have previously prevented some sportspeople from identifying and accessing the support they need, and how there is a generational shift on attitudes to this issue which is helping our future stars.

They also discussed how elite sport could lead the way in supporting the mental and physical health of the wider population, as coronavirus lockdown restrictions are eased and those who cannot work from home return to their workplaces where it is safe to do so.

The roundtable was convened to inform a review of the Government’s Mental Health and Elite Sport Action Plan as well as the continuing work on the return of competitive elite sport and opportunities being explored to use sport in promoting messages around mental health.

"Looking after our mental health is as important as our physical health, particularly through the pandemic which has brought about additional stress and change.

"The resumption of sport behind closed doors coincides with many people returning to work too, so it’s a good time to make sure everyone knows support is available.

"It was great to be joined by HRH the Duke of Cambridge, mental health organisations and some of the biggest names in British sport to talk about mental health. Sport is leading the way in this important conversation, and I pay tribute to football and the Duke for leading a generational shift to attitudes on mental health."

During the call, The Duke of Cambridge said:

"Through the Heads Up campaign, the football community has come together to do its part in driving lasting change by encouraging people to open up about their mental wellbeing, at the same time as embedding a mentally healthy culture across the sport.

"I believe that there is more we can do collectively to ensure this is replicated across all of sport. And that is why I am so happy to be here with you all to discuss how we can make that a reality. We have a unique opportunity to use the tragedy of the pandemic to bring about positive change. As the sporting world begins to return it is vital that we talk about the mental wellbeing of our sportspeople and fans."

The Duke reiterated on the call the importance of embedding a mentally healthy culture within sport, explaining that in due course, the football family will be coming together around a joint commitment to making football a mentally healthy environment for all, as a legacy of the Heads Up campaign.

"We’ve all come to understand the importance of looking after our mental health during difficult times. Mind’s support of the Heads Up campaign, our work with the EFL, and with organisations across the sports sector, shows that attitudes around mental health are beginning to change.

"This is a vital moment to work with all elite sports bodies and sports professionals themselves to ensure that the support available for their mental health is on a par with physical health. We are also keen to see the necessary investment and resources to achieve this prioritised accordingly."

The importance of the mental health of elite athletes was highlighted in government guidance supporting both the return to training for elite and professional athletes and the return to competitive top level sport behind closed doors on June 1, announced by the Culture Secretary.

The Government’s Mental Health and Elite Sport Action Plan, published in October 2018, was also informed by athletes, sports and mental health organisations. It has improved mental health education and training across elite sport, and is ensuring parity with physical health is promoted. Access to confidential sources of support and training delivered by mental health ambassadors is now commonplace across the sector.

Spearheaded by The Duke of Cambridge, the ‘Heads Up’ campaign, launched by the Football Association (FA) and Heads Together, is using the popularity of football to change the conversation on mental health and signpost support for those in need. On Friday the FA announced that this season’s FA Cup Final, provisionally scheduled to take place on Saturday 1 August 2020, will be renamed the ‘Heads Up FA Cup Final.’