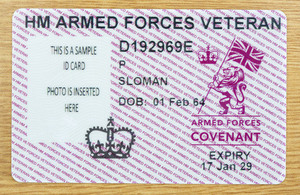 We aim to launch phase 2 to the wider veteran community, as soon as practicable, enabling existing veterans to apply for a card. Information on how to apply will be released closer to the phase 2 launch date.

A new ID card for armed forces veterans, which will help them access specialist support and services, has started to be issued to service leavers.

From today, any personnel who have left the military since December 2018 will automatically be given one of the new ID cards, which will allow them to maintain a tangible link to their career in the forces.

The cards allow veterans to easily verify their service to the NHS, their local authority, and charities, helping them to access support and services where needed.

All other veterans will be able to apply for a new ID card by the end of this year, to mark their time in the armed forces.

"We owe a huge debt of gratitude to the ex-forces community, and we are working hard to ensure they receive the support they deserve.

"These new cards celebrate the great commitment and dedication of those who have served this country, and I hope they can provide a further link to ex-personnel and the incredible community around them."

Veterans UK - which manages pensions and compensation payments for the armed forces - local authorities, service charities, NHS and GPs will also benefit from the change, as they will not have to conduct time-consuming checks to identify individual veterans.

The new ID card is one of three that are available to service leavers. Personnel leaving the armed forces are also able to keep their military IDs, known as the MOD Form 90, allowing them to maintain their emotional connection with their service. Additionally, veterans can access a range of discounts through the Defence Discount Service, the official MOD-endorsed service for the armed forces.

Last year saw the launch of the Strategy for our Veterans, published jointly by the UK, Welsh and Scottish Governments, which sets out the key areas of support for those who have left the armed forces. The consultation closes this Thursday (21st February).

All relevant Government departments have a responsibility to ensure that the military community is treated fairly, and not disadvantaged by their service, as part of the Armed Forces Covenant. The new ID cards will ensure the process of validating service is as straightforward as possible, so that ex-forces personnel can access support for issues related to their service quickly, where needed.

The cards will complement the NHS’ commitment to providing specialist health support for veterans in every part of the health service, enabling ex-service personnel in England, Scotland and Wales to access treatment where they have been affected by their service. Last year, NHS England announced that dedicated mental healthcare services are up and running in every part of the country, backed by £10 million of investment, with increasing numbers of GPs and hospitals becoming ‘Veteran Aware’, in order to fully address the needs of those who have served.

Any veteran in need of support can contact the Veterans’ Gateway – the 24 hour service which signposts ex-forces personnel to the wide range of support available to them, including housing and financial advice, career guidance, and medical care from the NHS. Since being set up in 2017, the Veterans’ Gateway has already received over 20,000 contacts, advising ex-forces personnel and their families.