Today's meeting was attended by Minister for Policing and the Fire Service, Nick Hurd, and representatives of the emergency services 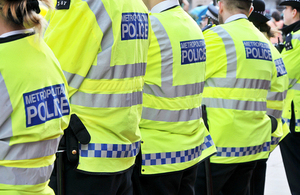 The Home Office has today hosted a cross-agency roundtable as part of its efforts to tackle the demand on police of dealing with cases involving mental health issues.

The police and health response to those in mental health crisis has improved, supported by government funding, legislative changes and better partnership working. But it remains the case that many calls to the police have a mental health component.

Today’s roundtable brought relevant agencies together to share good practice and consider further opportunities for collaboration to ease the burden on the police and provide mental health sufferers with appropriate care and support.

It was attended by Minister for Policing and the Fire Service, Nick Hurd, officials from the Department of Health and Social Care and representatives of the emergency services, among others.

Minister for Policing and the Fire Service, Nick Hurd, said:

"Police are too often left to deal with people suffering from mental health issues, who actually need help from healthcare professionals and social services.

"We have made progress but are determined to do more to free up police time so they can focus on fighting crime, while ensuring vulnerable people get the care they need."

The roundtable follows the minister writing to all forces and police and crime commissioners in February asking for more information about the scale and nature of the demand they face.

The feedback showed a sizeable proportion of the cases involving mental health issues that the police deal with relate to ‘concern for welfare calls’. They may involve injury, missing persons or suspicious circumstances, for example, and come from the public or health and social service agencies.

Some individuals with complex needs are also persistent callers to emergency services. The Metropolitan Police said they logged 2,269 calls from one individual in 2017.

Police have previously estimated that they may spend between 20 and 40 per cent of their time dealing with mental health cases.

Those present at the meeting included representatives from: