Number of new homes built soars to an 11 year high 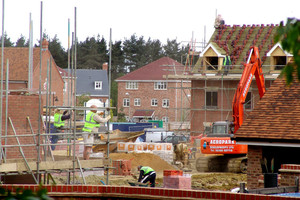 New data has found the number of new homes completed by developers in the year ending June 2019 had surged to over 170,000 – the highest number built over the same period in the last 11 years.

Published today (3 October 2019) by government, the figures show a total of 173,660 new homes were built for the year ending June 2019 – representing an 8% increase compared with the previous year alone.

"As Housing Secretary, it’s my mission to get Britain building.

"The data released today is hugely welcome, with the number of new homes built reaching an 11-year high. We are moving in the right direction, but there is still much more to do if we are going to deliver the numbers needed by communities up and down the country.

"I’m determined to deliver homes that are high-quality, well designed and good for the planet. Faster and simpler planning regulations will help us reach that goal, which is why I have announced measures to accelerate planning decisions for homes and reduce the use of unnecessary conditions by up to a third, freeing up developers so they can get on and build in a locally appropriate way."

The last year also saw the proportion of family houses built increase to 78% of all the new dwellings delivered in the marketplace – the highest the figure has been since 2000.

Ministers have this week announced new measures as part of the accelerated planning green paper which will quicken the pace of decision making and get shovels in the ground faster.

New permitted development rights, including allowing the demolition and rebuild of old commercial buildings, as well as requiring councils to meet timescales or refund planning application fees are aimed at getting homes built faster.

Today’s data release points to positive news ahead of publication of comprehensive housing delivery statistics in November. Last year 220,000 new homes were delivered by the English housing market – the highest in all but one of the last 31 years.