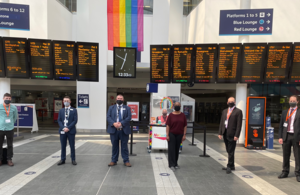 The Rail Minister Chris Heaton-Harris has today (13 July 2021) launched a new forum designed to coordinate the industry in helping those who are sleeping rough at stations across the country.

The forum, which has been introduced to meet the government’s objective of ending rough sleeping by 2024, will unite the industry for the first time in ensuring a measured approach is taken when supporting those most in need.

A groundbreaking pilot scheme is being run by Shelter on behalf of Network Rail to support those in need. As part of the pilot, Shelter has trained a number of Network Rail staff to connect with the people they encounter sleeping rough and refer them to Shelter’s expert services.

The 2 station pilots in Birmingham and Manchester have already helped 168 people since their launch last spring and are part of Network Rail’s ongoing routes out of homelessness programme. Rail Minister Chris Heaton-Harris was shown around the scheme today, as he visited Birmingham New Street station.

In summer 2020, the rough sleeping on rail charter was established by Network Rail and the Secretary of State for Transport was one of the first signatories. The charter sets out principles aimed at preventing and reducing rough sleeping and safeguarding those most vulnerable. The principles include:

• recognising and addressing risks of homelessness on the network and reduce, but not displace, individuals
• protecting the most vulnerable people in the community on or near the British railways with a safeguarding approach
• to work together as an industry with the wider transport sector to talk openly about homelessness

"We are determined to help those people sleeping rough at stations across the country, which is why last year we produced the rough sleeping on rail charter.

"The wonderful pilot scheme operated by Shelter on behalf of Network Rail is making a real difference and I am pleased to see that we have helped over 150 people in the last year alone.

"Now our rough sleeping on rail forum will align and unite industry efforts, allowing for more outreach programmes, like I have seen today, to be developed and support those in need."

The rough sleeping on rail forum will convene quarterly to bring together the rail industry, enforcement, charities and local authorities on the issue of rough sleeping, with the first meeting today, 13 July 2021.

"Our routes out of homelessness campaign is making a real difference all over the country, offering some of the most vulnerable people in our society hope for a better future.

"The expertise of charity partners like Shelter has been vital in making this a success. Bringing together these charity partners with the rail industry through the rough sleeping on rail forum will be hugely beneficial in making sure we are giving the right support to those who need it."