UK scientists help NASA answer the question, 'was there life on Mars?' 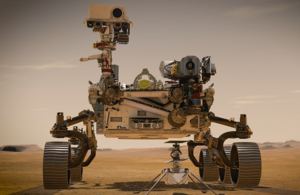 Backed by the UK Space Agency, researchers at Imperial College London and the Natural History Museum will help the NASA Perseverance rover select Martian rock and soil samples to be brought back from the red planet as it searches for evidence of ancient microbial life.

Jezero crater, the 28-mile wide destination of Perseverance, contains sediments of an ancient river delta, a location where evidence of past life could be preserved – if life ever did arise on Mars.

"UK scientists and researchers continue to play an indispensable role in the most impressive international space missions, helping to further our understanding of our extraordinary Solar System.

"The launch of NASA’s Perseverance Rover and the UK’s own Sample Fetch Rover vehicle, being developed in Stevenage, represents another critical step in building up our knowledge of life on the red planet. I wish the mission every success."

NASA’s Perseverance rover and the recently launched UAE Hope mission will blaze a trail ahead of the launch of the UK-built Rosalind Franklin rover, due to blast into space in 2022.

Perseverance has several science goals for its mission, and is carrying instruments geared to search for the carbon building blocks of life and other microbes and to reconstruct the geological history of the Red Planet.

These instruments will analyse scientifically interesting samples from the surface. Selected samples will be collected by drilling down to 7 cm and then sealed in special sample tubes and stored on the rover. When the rover reaches a suitable location the tubes will dropped on the surface of Mars to be collected by a future retrieval mission, which is currently being developed. The Sample Fetch Rover, being developed by Airbus in Stevenage, will collect the samples and take them to the NASA Mars Ascent vehicle. Professor Caroline Smith is involved in working with NASA and ESA scientists planning for how the samples will be curated upon their return.

The rover also carries the Ingenuity Mars Helicopter, which will fly short distances from the rover and marks the first attempt at powered, controlled flight on another planet. A successful test of the helicopter could lead to more flying probes on other planets.

Perseverance will also be trialling technologies to help astronauts make future expeditions to Mars. These include testing a method for producing oxygen from the Martian atmosphere, identifying other resources, such as subsurface water, improving landing techniques, and characterising weather and other potential environmental conditions that could affect future astronauts living and working on Mars.

"It is amazing that we are undertaking the first step of a sequence of missions to collect samples from Mars and return them to Earth. This has been on scientists’ wish list for forty years and we now have the technology to achieve it and have started the missions needed."

Professor Sanjeev Gupta, a geologist at Imperial College London, will be studying the ancient delta and lake sediments exposed in Jezero crater to reconstruct its evolution.

Prof Gupta is also one of the 10 Long Term Planners for the mission. He will be working closely with the science team in developing the strategic science vision of the mission and making sure that it fulfils the science objectives and with the engineers in day-to-day rover operations as they search for samples of rocks for future return to Earth.

"This is crucial to understand what the Martian climate was like early in Mars’ history and whether it was habitable for life. This information will be used to help us define the best spots to collect rock samples for future return to Earth.

"Laboratory analyses of such samples on Earth will enable us search for morphological and chemical signatures of ancient life on Mars and also answer key questions about Mars’ geological evolution."

Professor Mark Sephton, also from Imperial College London, is an astrobiologist who specialises in recognising the organic records of past life in rocks and will help the team select samples for eventual return to Earth.

"I hope that the samples we select and return will help current and future generations of scientists answer the question of whether there was ever life on the red planet. With one carefully chosen sample from Mars, we could discover that the history of life on the Earth is not unique in the Universe."

"It is such a privilege to be involved in this pioneering mission and work together with British and international colleagues to better understand the geological history of Mars, in a region that is very promising for preserving evidence of potential past martian life.

"Knowing as well that this mission is the pioneering step in the planned Mars sample return campaign is the icing on the cake for me; I can’t wait for the time that these unique samples will one day return to Earth and be available for study by scientists around the world."

Palaeontologist Dr Keyron Hickman-Lewis, soon to be joining the Natural History Museum, will be working as part of the Returned Sample Science team, concentrating on the identification of geological materials with high biosignature preservation potential. Put simply, these samples have a higher chance of finding traces of life and revealing secrets from the past environments of Mars and what sort of ecosystems may have existed.

"Mars probably presents our best chance of finding life elsewhere in the Solar System, and the fact that Mars 2020 plans to prepare samples for eventual return to Earth gives us a unique opportunity to discover traces of that life.

"During the mission, we will need to reconstruct the environment of the landing site, select samples for return, and prepare for their study in laboratories here on Earth.

"Of course, as a palaeontologist, my hope is to find traces of a fossilised Martian biosphere! But since the highly complementary instruments aboard Perseverance will conduct detailed geological, geochemical and, hopefully, geobiological assessments of Jezero Crater, this mission will inevitably represent a considerable advancement in our understanding of the early history of Mars."

UK company Teledyne e2v has provided the image sensor to drive two of the instruments on board Perseverance, SuperCam and SHERLOC. Teledyne’s sensor has previously been used in the ChemCam instrument on-board NASA’s Curiosity Rover. The SuperCam and SHERLOC instruments of Perseverance will advance this capability and be used to search for organic compounds and minerals, looking to see if they have been altered by watery environments, proving signs of past microbial life on the red planet.

"Teledyne’s space imaging heritage is unsurpassed, especially with the number of high TRL devices and the thousands of years of proven space flight. Of course, when it comes to missions to Mars, it is an especially proud moment to think of what the team at Teledyne can accomplish."

In two years’ time the Rosalind Franklin rover will go to Mars as part of the European Space Agency’s ExoMars mission to examine the geological environment on Mars and search for signs of life, past or present.

The Rosalind Franklin rover, which was built by Airbus in Stevenage, will be able to drill 2 metres below the surface, gathering samples from regions not affected by radiation.

This is a busy time for missions to Mars as we are in a window that opens every 26 months when the two planets align for the shortest journey. The United Arab Emirates’ Hope probe launched on 20 July and China also launched a rover on 23 July.