Defra joins forces with Keep Britain Tidy to launch the ‘Keep it, Bin it’ campaign 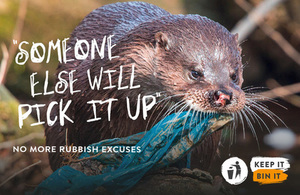 Shocking images are at the centre of a new campaign unveiled today (30 November) to crack down on littering in England.

Launched by Environment Secretary Michael Gove in partnership with environmental charity Keep Britain Tidy, and supported by some of the biggest names in retail, travel and entertainment, the campaign features poignant images of wildlife eating and getting tangled in litter, contrasted against typical excuses for people give for dropping litter. The emotive imagery demonstrates the impact that littering can have on the environment, with the RSPCA responding to 1,500 calls about litter-related incidents affecting animals every year.

This bold approach from Defra and anti-litter charity Keep Britain Tidy has already earned the backing of some of our biggest businesses with Mars Wrigley Confectionery, Greggs, McDonald’s, PepsiCo UK and Network Rail confirmed as the first tranche of campaign partners.

Today the campaign will be on display in train stations nationwide, including commuter hubs such as London Euston, Manchester Piccadilly and Birmingham New Street, as well as across partners’ social media channels and on Clear Channel’s Socialite screens. After launch, the campaign will feature at till-points in Gregg’s stores and at Cineworld cinemas through the partnership with PepsiCo UK.

As well as the environmental cost, littering also brings with it a huge financial cost. Keeping the country’s streets clean cost local government almost £700 million last year in England, much of this spent cleaning up avoidable litter. Millions of pieces of litter are dropped every day in England.

The new campaign is urging people to put their litter in a bin, or keep hold of it and put it in a bin when they see one. Empty packets and other litter should always be recycled wherever possible.

"The ‘Keep it, Bin it’ campaign is a bold statement of our intent to tackle the scourge of littering. Littering is antisocial and unacceptable. It plagues our environment and poisons our wildlife.

"We know we won’t achieve this ambition by working alone. That’s why I’m thrilled to see some of our biggest companies including Mars Wrigley Confectionery, Greggs, and McDonalds and the tireless campaigners at Keep Britain Tidy, joining forces with us to help improve our precious environment."

"We are delighted to be partnering with Defra to deliver the first government backed national anti-litter campaign in a generation. As the largest consumers of food and drink on the go in Europe the need for this campaign has never been greater. We are urgently asking everyone to eliminate litter by keeping their packaging with them when there isn’t a bin and bin it when there is one.

"We know the impact that litter has on our environment, on wildlife and, ultimately, our oceans where 80% of the plastics found there come directly from the land.

"This campaign will raise awareness with those people who still think it is acceptable to leave their rubbish anywhere other than in a bin.

"Mars Wrigley Confectionery is hugely proud to support the national anti-litter campaign, as it builds on our long-standing commitment to tackling this important issue.

"We feel strongly that industry has a critical role to play in delivering long-term behaviour change by encouraging people to bin their litter responsibly and we look forward to working with the team at Defra and Keep Britain Tidy to deliver on this goal."

"We love that our customers care about the environment, and so do we - that’s why we’re committed to doing all we can to protect it and tackle the growing issue of litter.

"Social responsibility forms the bedrock of our business and to this end, we have rigorous targets in place, ensuring we carefully manage any environmental impact from our operations. We are proud of our existing partnerships with a number of environmental charities including Keep Britain Tidy and look forward to working with Defra and other campaign partners to really bolster all of our efforts in this area and make a positive impact together."

"As a business we have made a number of moves to help reduce our impact on the environment. These include introducing recycling units in our dining areas, reducing the amount of packaging we use and moving our plastic straws behind the counter, whilst we move to paper straws, which has reduced the number used by almost 10%. Our restaurant teams have also, for over 30 years, carried out daily litter patrols in their local area, collecting all the litter they find.

"We are proud to now be supporting the ‘Keep It, Bin It’ campaign. As a father of two boys, I am passionate about the responsibility we have to ensure our communities are clean and our natural environment remains healthy for future generations."

Despite the huge cost of cleaning up litter, a worrying 1 in 5 people admit to dropping litter. A recent study also showed 1 in 4 people admit to ‘careful littering’, such as leaving drinks cans or coffee cups on window ledges.

The government wants to make littering culturally unacceptable within a generation, with the initial focus on 16 to 24 year olds. Evidence suggests this age group is more likely to drop litter.

The campaign follows the first ever Litter Strategy for England, published last year, which sets out how government will work to clean up the country, change attitudes towards littering, and strengthen enforcement powers.

We are keen to hear from commercial and charitable organisations that are interested in joining our campaign. Simply email our partnerships team at Litter@defra.gov.uk to express an interest.