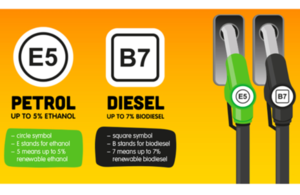 • filling stations are to clearly identify biofuel content of road fuel to increase awareness among drivers
• uniform EU-wide labels will also prevent drivers from filling up with the wrong fuel abroad
• biofuels supplied in the UK reduce greenhouse gas emissions by over 70% compared to fossil fuels, helping combat climate change

Drivers are being urged to think more carefully about the environmental impacts of their journeys through a new government campaign launching today (6 June 2019).

From today, filling stations across the UK will start rolling out new labels, which will help educate drivers on the benefits of biofuels.

This is the latest step in the government’s drive to get consumers thinking more actively about the environmental impact of their transport choices, and follows a commitment to end the sale of diesel and petrol cars by 2040, set out in the Road to Zero strategy.

"Drivers should be aware of the environmental impact of their travel choices, and seeing this when they are buying fuel can help remind them why decarbonising transport is so important.

"Biofuels are a key way of achieving the emissions reductions the UK needs, and their use reduced CO2 emissions by 2.7 million tonnes last year alone – the equivalent of taking around 1.2 million cars off the road.

"Our new campaign will help drivers understand the role of biofuels, while also choosing the right fuel for their vehicle at home and abroad."

Biofuels can reduce greenhouse gas emissions by up to 90% compared to fossil fuels, and the campaign is set to highlight the crucial role that they will play during the transition to electric vehicles. Last year, 1.6 billion litres of renewable transport fuels were supplied in the UK.

"These labels are crucial for informing the public about what the UK is doing to decarbonise transport.

"Making the most of the huge environmental benefits of sustainable biofuels makes complete sense, and can help reduce emissions during the transition to a low carbon future."

Biofuels are made from a range of materials, including oil, fats, and grease waste, which are often recovered from sewage systems and water treatment works.

As even greener fuels, such as E10 - a petrol grade with up to 10% renewable ethanol - come onto the market, the labels are set to have an increasingly important role to play in raising consumer awareness of alternatives to traditional fuel.

The campaign follows a government push to help people make more conscious transport choices and understand how these contribute to greenhouse gas emissions, such as encouraging the use of cleaner vehicles.

These include a commitment to end the sale of new conventional diesel and petrol cars and vans by 2040, investment in hybrid trains, the doubling of investment in cycling and walking since 2010, along with the £2.5 billion Transforming Cities Fund which will develop innovative public transport schemes in some of England’s biggest cities.