The first force to use our new case management system for prosecuting Single Justice Procedure (SJP) cases, as roll out begins to all forces 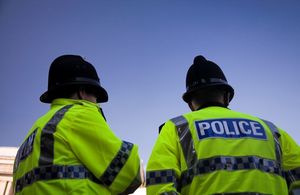 Hampshire Police is the first force in England to use a new management system for SJP cases. Anyone in the county responding to an SJP charge, such as a traffic offence, will be able to enter their plea digitally. This means they can resolve their case quickly, fairly and efficiently without going to court.

"I’m delighted we’ve been chosen as the first force to deal with traffic offences using this new system. I can see immediate benefits and some real efficiencies for the police, as well as for our local citizens.

"It will mean that when people are charged with traffic offences, like speeding or driving without insurance – and if they plead guilty – they’ll be dealt with efficiently and fairly by the justice system, with minimal delays.

"It means our local courts can concentrate on those cases that really need to be there and for us, as prosecutors, we’re able to see and act on real-time results."

The service is responsible for administering single justice procedure (SJP) cases, delivered through the Common Platform, our new digital case management system. Support for users of the service is provided by the Courts and Tribunals Service Centre. It’s designed to enable HMCTS and our justice partners to manage and share criminal case information more effectively. It delivers greater transparency, consistency and faster case processing.

The SJP is an element of the Single Justice Service introduced in 2015, which allows a single magistrate to deal with adult, summary-only, non-imprisonable offences for ‘guilty’ pleas and ‘proof in absence’ cases (when a defendant has not responded to a charge). These cases account for about 850,000 of criminal cases per annum, which almost exclusively result in a financial penalty.

The magistrate, supported by a legal adviser, decides on these cases outside of the courtroom in the absence of the prosecutor and defendant. It allows those who plead guilty to resolve their case without going to court, minimises delay and frees up court time for those cases that need to be heard in court.

As soon as the defendant provides a guilty plea online, the system will prioritise their case. A plea may be dealt with immediately and defendants will no longer have to wait a minimum of 28 days for an outcome (for a fine, withdrawal or referral to open court), as is currently the case.

Postal pleas will still be an option and will go to a centralised unit and uploaded to the case.

All defendants can request an open hearing in court whether they enter a guilty plea or not guilty plea.

Our Courts and Tribunals Service Centre will support defendants and magistrates’ courts using the process, rather than queries going to individual courts. They will also allocate open hearings.

We’re currently rolling out the Common Platform for other criminal cases to all criminal courts across England and Wales, and plan to have completed this process by the end of 2021.

It’s already being used by courts to process Transport for London, TV Licensing and DVLA SJP cases, for example:

We are planning to further extend the roll out to non-police prosecutors, including local authorities and transport companies over the next few months.

The overall system performance will be closely monitored, making sure everything works as anticipated, before gradually increasing capacity.