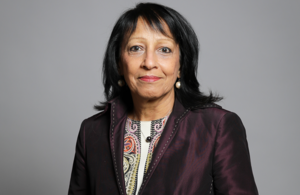 • Minister for Women and Equality selects preferred candidate for Equality and Human Rights Commission Chair
• Baroness Falkner to take up role following pre-appointment scrutiny
• Baroness to bring significant experience to role alongside her long-term commitment to equality
The Minister for Women and Equalities Liz Truss has today (Thursday 15th October) confirmed her decision to select Baroness Falkner of Margravine as the preferred candidate for Chair of the Equality and Human Rights Commission (EHRC).

Baroness Falkner brings significant leadership experience to the role, having previously held the role of Chairperson of the EU Financial Affairs Sub-Committee in the House of Lords (2015-19).

Prior to her becoming a peer in 2004, the Baroness worked for the Liberal Democrats in the House of Commons and party headquarters including as Director of International Affairs and Policy. She also worked at the Commonwealth Secretariat and as Chief Executive of Student Partnerships Worldwide, was formerly a member of Parliament’s Joint-Committee on Human Rights and is currently a member of the Bank of England’s Enforcement Decision Making Committee.

“Baroness Falkner’s experience and commitment to equality means she’s an excellent candidate to take forward the important work of the EHRC.

“I look forward to working with her as we seek to deliver the government’s levelling up agenda, making sure that all corners of the country have equal access to opportunity.”

An independent selection process has been carried to select the new Chair in accordance with the Governance Code for Public Appointments.

Before formal appointment, Baroness Falkner will appear at a pre-appointment scrutiny hearing conducted by the Women and Equalities Select Committee and the Joint Committee on Human Rights in November.

• The Equality and Human Rights Commission is Great Britain’s national equality body and has been awarded an ‘A’ status as a National Human Rights Institution (NHRI) by the United Nations. The Commission’s job is to make Britain fairer by safeguarding and enforcing the laws that protect people’s rights to fairness, dignity and respect.