The team will join 16 other nations at the international event for wounded, injured and sick military personnel and veterans. 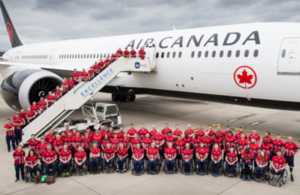 The Invictus Games 2017 UK Team in front of an Air Canada plane at London Heathrow.

A 90-strong team of wounded, injured and sick (WIS) military personnel have departed from London Heathrow for Toronto, Canada to represent the UK in the third Invictus Games.

The eight-day sporting event will see 550 individuals from 17 nations compete across 12 sports including athletics, wheelchair basketball, swimming and a new sport for 2017, golf. The event will begin with an opening ceremony on 23 September at the Air Canada Centre, featuring Canadian singers Sarah McLachlan and Alessia Cara, and will finish with a closing ceremony on 30 September with performances from Bruce Springsteen and Bryan Adams.

The Invictus Games, the only international multi-sport event for WIS military personnel and veterans, harness the power of sport to inspire recovery. Getting involved in sport provides significant physical and mental health benefits including increasing self-confidence.

More hopefuls than ever before applied for a place in this year’s UK team, which was unveiled by Prince Harry, the patron of the Invictus Foundation, in May. Team selection was based on the benefit of the games to an individual’s recovery as well as their performance and commitment to training.

Minister for Defence People and Veterans, Tobias Ellwood MP, was at Heathrow. He said:

"I was proud to meet our UK competitors who are overcoming injury or illness to achieve incredible things and truly embodying the meaning of Invictus; unconquered. I am extremely excited to attend the Games next week to cheer them on and I’m sure we will see some remarkable achievements."

Of this year’s UK team, 62% are new to the Invictus Games including the 2017 Captain, former Army Major Bernie Broad. Bernie served in the Grenadier Guards for around 30 years and due to injuries sustained in Afghanistan lost both his legs below the knee.

"I feel extremely proud to lead the UK Team to Toronto for what promises to be an outstanding third Invictus Games. Our success will not be measured by how many medals we bring home, but by our personal successes, how many challenges we overcome and how many international friends we make."

On 22 September, 260 family and friends will travel to Toronto to join team members and show their support.

The Ministry of Defence has worked in partnership with Help for Heroes and The Royal British Legion to deliver the UK Delegation for Toronto 2017. The Ministry of Defence is a partner in the Defence Recovery Capability, a programme which helps WIS Service personnel either return to duty from injury or helps them back into civilian life.