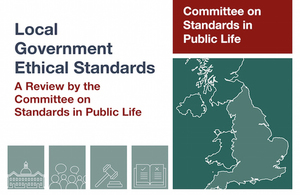 • a new power for local authorities to suspend councillors without allowances for up to six months
• revised rules on declaring interests, gifts and hospitality
• local authorities retain ownership of their own Codes of Conduct
• a right of appeal for suspended councillors to the Local Government Ombudsman
• a strengthened role for the Independent Person
• greater transparency about the number and nature of Code complaints.

Launching the report, Lord Evans, Chair of the Committee on Standards in Public Life, said:

“Local government impacts the lives of citizens every day, providing front-line services to those it serves. Its decisions directly affect the quality of life of local people. High standards of conduct in local government are needed to demonstrate that those decisions are taken in the public interest and to maintain the public’s confidence.

“The evidence we received supports the view that the vast majority of councillors and officers maintain high standards of conduct. There is, however, clear evidence of misconduct by some councillors. Most of these cases relate to bullying or harassment, or other disruptive behaviour. There is also evidence of persistent or repeated misconduct by a minority of councillors. “We are also concerned about a risk to standards under the current arrangements, as a result of the current rules around declaring interests, gifts and hospitality, and the increased complexity of local government decision-making.”

“We believe that the benefits of devolved arrangements should be retained, but that more robust safeguards are needed to strengthen a locally determined system. We are also clear that all local authorities need to develop and maintain an organisational culture which is supportive of high ethical standards. A system which is solely punitive is not desirable or effective; but, in an environment with limited external regulation, councils need the appropriate mechanisms in place to address problems when they arise.

“Our recommendations would enable councillors to be held to account effectively and would enhance the fairness and transparency of the standards process. Introducing a power of suspension and a model code of conduct will enable councillors to be held to account for the most serious or repeated breaches and support officers to address such behaviour, including in parish councils. Strengthening the role of the Independent Person and introducing a right of appeal for suspended councillors will enhance the impartiality and fairness of the process, which is vital to ensure that councillors are protected from malicious or unfounded complaints. And greater transparency on how complaints are assessed and decided in a system which is currently too reliant on internal political party discipline will provide a safeguard against opaque decision-making and provide reassurance to the public.

“Finally, I would like to thank all those who responded to our consultation or gave us their time and contributions to help build the evidence base for this report. It is clear to us that local government in England has the willingness and capacity to uphold the highest standards of conduct; our recommendations and best practice will enable them to do so.”

From:
Committee on Standards in Public Life