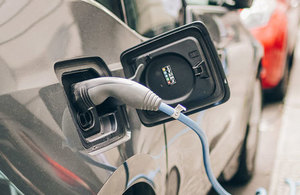 • ‘postcode should play no part’ in ease of using an electric car, Transport Secretary says

The Transport Secretary has this week written to local authorities across the country, urging them to take advantage of funding on offer to build up their electric car charging infrastructure and to increase local access to chargepoints for drivers.

This comes as the Department for Transport publishes a ‘league table’ of data illustrating the public electric car charging infrastructure available across the UK and highlighting gaps in provision.

The government is clear that it wants driving an electric vehicle to be convenient for people from all corners of the country, and that local authorities have a key role to play. The data shows that London is currently leading the electric vehicle infrastructure revolution nationally, with almost 4,000 public electric vehicle charging devices installed in the region. Scotland has more than 1,500 charging devices, with the North West, South East and South West regions just behind. In these regions Glasgow City, Manchester and Liverpool cities, and Milton Keynes are amongst the best performing local authorities.

There are now more charging locations than petrol stations, but there are still over 100 local authorities with fewer than 10 public charging devices per 100,000 population. Figures published today (2 November 2019) reveal there are 15,000 charging devices across the country, equating to 22,500 places to charge.

"Your postcode should play no part in how easy it is to use an electric car, and I’m determined electric vehicles become the new normal for drivers.

"It’s good news there are now more charging locations than petrol stations, but the clear gaps in provision are disappointing. I urge local councils to take advantage of all the government support on offer to help ensure drivers in their area don’t miss out.

"To help increase the provision of charging locations, the government is offering grants for the installation of chargepoints on the street, in work and at home. We are also offering grants to lower the upfront cost of these cars so everyone is able to experience the benefits."

Minister for the Future of Transport George Freeman said:

"Mapping chargepoints and producing a league table of availability by council area is intended to raise awareness.

"There are now more than 22,500 public chargepoints and at least one rapid charge point at over 95% of all motorway services areas.

"To help level up the country, we’ve recently doubled the funding available for councils to build chargepoints on residential streets."

Electric vehicles have a key role to play in improving air quality and driving down emissions.

Funding for electric vehicle chargepoints remains available in 2019/20 through schemes including the:

Charging device location data for the ‘league table’ is sourced from the electric vehicle charging platform Zap-Map. It represents devices reported as operational at midnight, 1 October 2019.