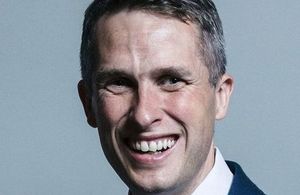 On Monday, 30 September, Education Secretary Gavin Williamson announced a series of measures to help make sure the country can continue to build the skilled workforce it needs for the future and improve productivity. This includes an ambition to boost further education over the next decade with the aim of overtaking Germany in the opportunities offered to students studying technical routes by 2029.

The government recently announced an additional £400 million for sixth forms and colleges for 2020-2021 - the single biggest annual uplift since 2010. The new measures will build on this significant investment and support the government’s ongoing work to transform technical education including through the introduction of new T Level qualifications from next year, new Institutes of Technology and the creation of more high-quality apprenticeship opportunities.

The government will provide up to £120 million of additional funding to enable every region in England to establish a high-quality Institute of Technology.

Institutes of Technology are unique collaborations between further education colleges, universities, and employers – including Nissan and Microsoft – offering higher technical education and training mainly at Levels 4 and 5 (above A levels and T Levels but below degree level) in key sectors such as digital, construction, advanced manufacturing and engineering.

Twelve Institutes are already being established across the country – backed by £170 million of government investment – to provide employers with the skilled workforce they need to drive growth and productivity across the country and get more people into rewarding jobs.

To build on this, the government will launch a second competition with the aim of establishing up to 8 more Institutes in areas of the country that do not currently have access to one.

New Skills and Productivity Board

A new Skills and Productivity Board will also be established to provide the government with expert advice on how to ensure the courses and qualifications on offer to students are high-quality, are aligned to the skills that employers need for the future and will help increase productivity.

To continue driving up standards and support more disadvantaged young people aged 16-19 to study maths, Mr Williamson also committed to opening a network of 11 Maths Free Schools across every region of the country – and confirmed that a new Maths Free School will open in the North East through a partnership between Durham University and Durham Sixth Form College.

Maths Schools offer A levels in Maths, Further Maths and Physics in partnership with top universities – helping young people, whatever their background, to fulfil their potential by learning from the best mathematicians.

These schools will build on the successes of the Maths Schools run by the University of Exeter, in partnership with Exeter College, and King’s College London – in 2018, 99% of King’s mathematics students achieved an A or A* in A Level mathematics, for Exeter this was 85%.

STEM subjects – which include maths – are some of the most in-demand skillsets in the labour market. Maths is already the post popular subject at A Level, with almost 25% of students choosing to study it.