New bypass to ease transport of goods between the M1 and Midlands, and support development of new homes and jobs 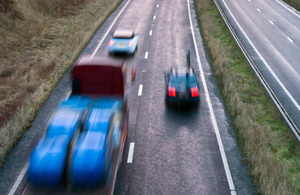 • multimillion-pound scheme announced to form north-western bypass for Luton, linking M1 to A6
• works will support construction of up to 3,600 new homes, reducing congestion in north Luton and enhancing east-to-west accessibility
• announcement is the latest move in government’s drive to level up transport infrastructure across the country

The project, supported by the Department for Transport (DfT) and led by Central Bedfordshire Council and South East Midlands Local Enterprise Partnership (SEMLEP), will see the construction of a new 2.75-mile road link between Junction 11a of the M11 and the A6, forming a north-western bypass for Luton.

Not only will the new road connect the east and west of north Luton, opening the area up to economic growth and easing the transport of goods between the M1 and Midlands, it will also support the development of up to 3,600 new homes and around 2,800 new jobs.

It’s not just motorists who will benefit from the works, as the project hopes to cut carbon emissions and encourage active travel by including a 3-metre-wide foot and cycle path on the south side of the link road.

"Residents in Bedfordshire deserve quicker and easier journeys and I know many have been frustrated by poor east-west connections north of Luton.

"That’s why I’m pleased to be backing the new link road, which will support the construction of new homes and jobs, drastically improve accessibility and make the area more attractive to new business."

The announcement comes as the government continues its drive to build back better from the pandemic and level up transport links to boost regional economies right across the country.

"We are delighted to have secured funding from the Department for Transport for this key link road, which will deliver improved east-west connectivity across Central Bedfordshire and the wider area and facilitate the delivery of up to 3,600 new homes and a Rail Freight Interchange, which are important in meeting a wider housing need and strengthening our economic offer."

"The funding provides us with a welcome opportunity to improve connectivity between towns in Central Bedfordshire, especially east-west linkages, whilst also easing congestion in the villages and areas north of Luton.

"It will also facilitate the delivery of growth envisaged in our adopted local plan and will provide homes, jobs and necessary supporting infrastructure for Central Bedfordshire and the wider area."

"This major infrastructure project will facilitate economic growth in Central Bedfordshire and improve east-west connectivity within the South East Midlands and wider Oxford to Cambridge Arc.

"The link road will open up employment land to support new job opportunities and enable new homes to be built for the benefit of local people. It will also help to alleviate congestion locally."

Construction of the road is due to begin in January 2022 and be completed by January 2024.

The total cost of the scheme comes to £60.248 million with a contribution of £32.750 million from DfT. The remaining sum will come from local private developer contributions secured by the Council.

From:
Department for Transport
Baroness Vere of Norbiton