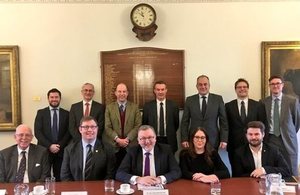 The roundtable with representatives from the food, drink and retail sector provided an opportunity to discuss Brexit, framework agreements, and sector priorities over the coming months.

The Secretary of State, David Mundell, has hosted representatives from the Scottish Salmon Producer’s Organisation, Scottish Retail Consortium and the Scotch Whisky Association and others at a roundtable to discuss the opportunities and challenges that Scotland’s world famous food and drink industry faces as the UK leaves the EU.

Discussions focused on frameworks in regards to food labelling, and the need to provide a common UK approach in order to allow seamless trade between Scotland and the rest of the UK.

"Protecting and promoting iconic Scottish food and drink businesses is absolutely vital to the UK Government, and it is important that we do nothing that creates any new barriers to the UK’s internal market – which is worth four times that of Scotland’s trade with the EU.

"Without Scotland’s two governments agreeing on common frameworks we could end up with different labelling requirements across the UK. This could mean a jam producer in Dundee would be unable to sell their products to cafes in Doncaster without complying with two separate sets of requirements, increasing production costs, which is clearly detrimental to businesses. That’s why common frameworks in areas such as food labelling are the sensible approach.

"Scotland’s food and drink is famous across the world, as well as enjoyed all over the UK, so I am looking forward to meeting some of the men and women behind prestigious brands like Aberlour whisky and Walkers Shortbread, and hearing about their experiences in international markets."

Earlier this month the UK Government published a provisional analysis of the returning EU powers. It lays out clearly that the Scottish Parliament, as well as other devolved administrations, will receive extensive new powers. Of the 153 areas in the analysis, there are only 24 that will require more detailed discussions to see whether legislative common frameworks might be needed, in whole or in part.

As well as visiting the Aberlour Distillery and Walkers Shortbread, Mr Mundell is also holding a variety of meetings in Inverness, Elgin, and Aberdeen.

These will include discussions on growth deals with Elgin Council, updates on the Northcoast 500 route, an event to discuss exporting with Inverness businesses, as well as meeting with individuals from the oil and gas industry.