Hundreds of thousands of pupils benefit from tutoring 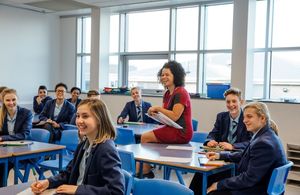 Hundreds of thousands of children across the country benefited from catch up tutoring in the first term of the academic year, new figures from the Department for Education reveal today (Tuesday 11 January).

Of the 302,000 courses which began last term, an estimated 230,000 were provided through the new, school-led tutoring pillar, showing that the introduction of greater flexibility for schools in providing tutoring is proving powerful in making sure the programme is reaching as many young people as possible.

The government’s ambitious education recovery plan includes investment of almost £5 billion, including £1.5 billion for tutoring, but the best way for young people to catch up on any missed learning is to make sure they are in school, learning face to face, and last week saw millions of children across the country return to classrooms to be with teachers and friends.

"We are now seeing the real reach and impact of the unprecedented investment this government is making in supporting children’s education recovery. Every pupil – wherever they live – should be supported to get back on track and reach their potential, and that’s what this tutoring programme is doing.

"We know there is still work to do, but it’s hugely encouraging to see so many students from all backgrounds have been directly reached through the government’s tutoring programme, and I encourage all schools to take advantage of it."

A further 52,000 courses began through Tuition Partners and an estimated 20,000 pupils have started packages through the Academic Mentor pillar of the programme. The government is working closely with Randstad and the sector to make sure these numbers continue to rise and tutoring continues to reach the students who need it.

As schools manage the higher than expected absence among staff and pupils, the National Tutoring Programme will continue to offer access to tutoring through all three strands for the remainder of this academic year to ensure schools have greatest possible flexibility in offering pupils the support they need, including access to online tutoring.

The Department has also today published research conducted with primary and secondary schools to understand how schools have responded to the impacts of the pandemic.

According to the research, schools faced complex challenges in the autumn 2020 term, relating to pupils’ academic progress, wellbeing, and behaviour, as well as managing ongoing to Covid-19 restrictions. Schools responded to these by employing varying strategies targeting specific groups, such as those who had fallen behind in their learning, disadvantaged pupils, pupils with SEND, or transition year groups.

Evidence suggests that small group tuition can boost progress by an average of two months in secondary schools and four months in primary schools. By providing high-quality tuition to pupils through the NTP, we want to extend this catch-up opportunity to pupils whose education has been impacted the most by the COVID-19 pandemic.

The £5 billion investment in education recovery is in addition to the significant increases in core schools funding being delivered over the next three years, including a boost of £4 billion - or five per cent per pupil in real terms – next year alone.