The Civil Service signed the Menopause Workplace pledge today, committing to recognise the impact of menopause and actively support women who are affected 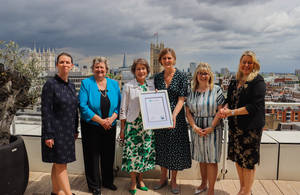 The Civil Service signed the Menopause Workplace pledge today (7 June), committing to recognise the impact of menopause and actively support women who are affected.

The pledge, organised by the Wellbeing of Women charity, calls on signatories to recognise the impact that menopause can have, create open environments to talk about the issue and provide active support for staff.

Ministers and senior civil servants endorsed the pledge at a special event to show the Civil Service’s ongoing commitment to support women in the workplace. The Civil Service is now the largest organisation to signal its support.

262,670 women work in the Civil Service, making up more than half of the Civil Service (54%). 48% of the Senior Civil Service is made up of women, up from 35% in 2011. The median age of civil servants is 45 years and this often when women will be going through the perimenopause or menopause.

Becoming a signatory of the Wellbeing of Women ‘Menopause Workplace Pledge’ demonstrates the government’s ongoing commitment to support women in the workplace, including by helping to generate more conversations between managers and employees, and creating a more inclusive workplace which enables women of all ages to thrive.

It builds on the Civil Service’s existing support, including the Menopause in the Workplace Policy launched in December 2021, which identifies ways that departments can support employees such as by offering workplace adjustments.

"Women must feel able to talk about their health issues and know that they will be supported.

"By recognising the impact that menopause can have, and creating an open culture free from embarassment, we can ensure those women feel comfortable in the workplace and prevent the brightest from leaving the Civil Service.

"Signing this pledge, alongside our ongoing commitment to supporting women in the workplace and the new Women’s Health Strategy, takes us one step closer to that goal, meaning better government and better public services for everyone."

"For some women, the symptoms of the menopause can be extremely debilitating and it’s absolutely crucial they feel confident asking for support at work.

"This pledge will ensure women working across the civil service feel supported. I encourage other businesses to do the same – big companies, such as Asda and Thames Water, are already joining us with this pledge to make sure their workplaces have menopause strategies in place."

Underpinned by analysis from almost 100,000 responses to the call for evidence from women across the country, the strategy will reflect the government’s ambition for a healthcare system that prioritises care on the basis of clinical need, not gender – of which menopause will form a central part.

The government has also set up a Menopause Taskforce, chaired by Minister for Women’s Health, Maria Caulfield and Carolyn Harris MP, to consider the role that education and training, workplace policies and peer groups for menopausal women can play in supporting women through what can be a mentally and physically challenging time.

"The Civil Service is at its best when we attract and retain top talent from wherever it comes.

"The menopause is a fact of life that can have a real impact on the day to day life, and participation in the workplace, of half of the population.

"Signing the menopause pledge will help everyone better understand how to support colleagues going through the menopause so that they can continue to fulfil their potential."

Last year, the Minister for Employment, Mims Davies, commissioned an independent report into menopause in the workplace which produced a series of recommendations, and a government response outlining its plan for increasing menopausal women’s participation in the labour market will be issued in the coming months.

This builds on the work the Department for Work and Pensions has been doing to engage employers across the country to improve working conditions for women transitioning through the menopause, including amplifying examples of best practices, and providing advice through their nationwide 50 Plus Champions network in Jobcentres, so more businesses are able to recruit and retain women experiencing the menopause.

"We’re absolutely committed to ensuring we have the support in place to recruit and retain women experiencing the menopause, including in the Civil Service, and last month we saw the number of women in the UK workforce rise by more than 58,000.

"Menopause is still a leading cause for women leaving the workforce, which is why I’m working with employers, and across government to improve the support in place for women in the workplace."

"The menopause affects hundreds of thousands of women every year, but for some the symptoms of the menopause can seriously affect their daily lives, impacting them while at work.

"Women are a vital part of the workforce and this pledge by the civil service shows what can be done by an employer to help women going through the menopause.

"We’re continuing to level up women’s health and we have already launched a grant fund to support women in the workplace, set up the menopause taskforce and we will publish the first ever government-led Women’s Health Strategy."

"Women make up half the UK workplace and make extremely valuable contributions day in, day out.

"I’m very proud of the work being done across the Civil Service to ensure that we enable colleagues to receive the support that they need to flourish. Our new workplace policies and the signing of this pledge signals our visible commitment as an employer."

"The Civil Service is sending a powerful message – that women both need and deserve our support in the workplace. Women are often at their most productive and successful at this stage in their lives. Many are the breadwinners for their family and make essential contributions. It makes complete sense to provide simple, practical support to help keep them in the workplace."