£3.7 million to fund 5 new garden towns across the country

New garden towns will provide up to 64,000 much-needed homes across England 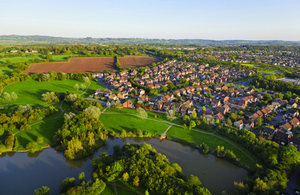 Five brand new garden towns have been unveiled unlocking up to 64,000 much-needed homes across England, the Minister of State for Housing has announced today (25 March 2019).

The locally-led new communities, from Hertfordshire to Gloucestershire, will receive a share of £3.7 million of funding to fast-track specialist survey work and planning works necessary for each new town’s development.

The funds will be spent by councils to help to deliver the homes and infrastructure needed for both neighbouring communities and future residents who will call the new town home. This includes specialist survey work and planning applications.

The 5 successful bids are:

Councils and groups from around the country submitted more than 100 ambitious proposals with the 5 taken forward receiving an initial £750,000 to help develop plans for vibrant, thriving settlements where people can live, work and raise families.

Today’s announcement is the next step in the government’s drive to build the homes this country needs, and follows the news last month of a £9 million investment to speed up the building of existing garden towns and villages.

"These new towns will not only provide homes for families, but will be vibrant communities where everyone, including neighbouring communities can benefit from new infrastructure – leaving a legacy for future generations to be proud of.

"I congratulate these councils who have put forward ambitious proposals, which will build many thousands of high-quality homes, and am pleased to support them as they work to make these plans a reality."

Garden communities can take the form of new villages, towns or cities and have the potential to deliver well designed homes at an increased scale, boosting the local economy and creating new jobs.

The 5 new schemes announced today will join the 23 existing garden communities the government is currently supporting, which are already delivering new homes today, bringing us closer to the government’s aim to deliver 300,000 new homes a year by the mid 2020s.