Prime Minister's speech in Poland on the Russian invasion of Ukraine: 1 March 2022 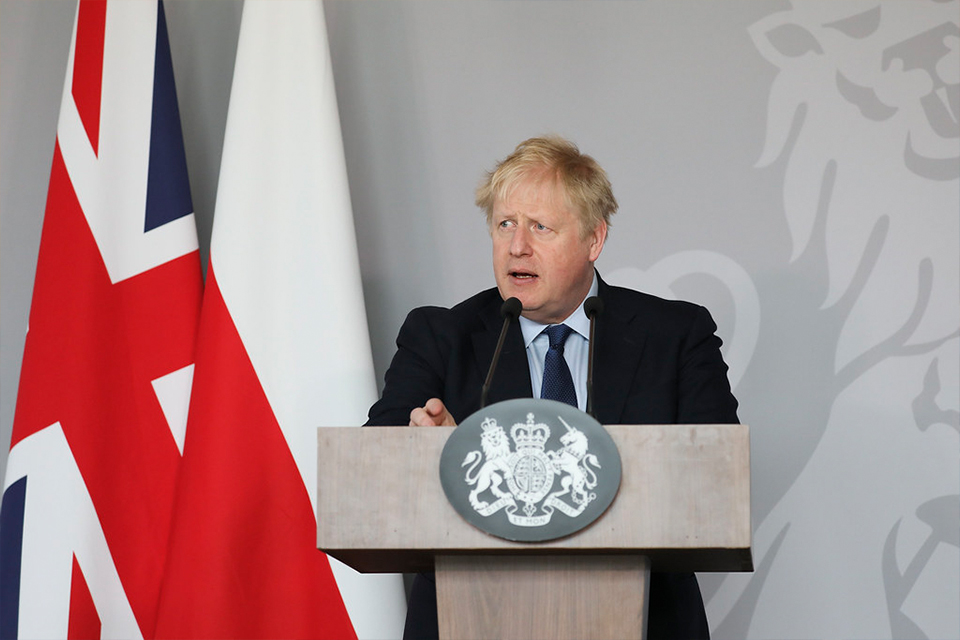 I’m back here in Poland again. It’s always good to be here but I’m afraid I’m here in the background of an unfolding European tragedy, when Poland is in the frontline.

Two weeks ago, when I met Mateusz and the Polish government, we agreed that our countries would stand shoulder to shoulder in what we predicted jointly would be a coming crisis.

And as indeed we have stood shoulder to shoulder so many times in the last hundred years, that crisis in now upon us.

It is now 126 hours since Vladimir Putin decided to launch a war of aggression on our continent, tearing up every principle of civilised behaviour between states.

He has hurled his war machine on the people of Ukraine, a fellow Slavic country; he has bombarded civilian targets and fired rockets at blocks of flats.

He is responsible for hundreds of civilian casualties, including growing numbers of children and for also of course the deaths of many Russian and Ukrainian soldiers.

We must accept the grim reality that Putin will continue to tighten the vice and if you go by sheer size and firepower of Vladimir Putin’s war machine. The odds have always been heavily against Ukraine’s armed forces.

But one thing is already clear and one prediction – that both Mateusz and I made – is being proved right.

This invasion of a free and sovereign country is not only a tragedy, but it is a colossal mistake. Putin has lied to his people and to his troops about how this conflict would go, and he has now been caught out in that lie.

They have not been welcomed to Ukraine, as he prophesised. Their tanks have not been cheered in the streets or garlanded with flowers.

Instead, Ukrainians have mounted an astonishing and tenacious resistance, which has snarled up Putin’s advance on Kyiv and Kharkiv and delayed his whole invasion plan.

With every hour, the passionate desire of the people of Ukraine to defend their country has become more apparent and millions of people around the world have been stirred and moved by their courage.

The reality is that whatever happens in the coming days or weeks, the Ukrainian people have shown already that their spirit will not be broken, and they will not be subdued.

I marvel at his coolness under fire, his bravery and his invincible good humour. I think he is mobilising the world against the horror of what is happening.

And as I said in Munich 10 days ago, Russia will not be able to subjugate the second largest country in Europe, encompassing nearly a quarter of a million square miles.

Putin’s war machine will not succeed in holding down Ukraine. Even to hold down a part of that giant country, with the constant threat of reprisals and guerrilla attacks, would be militarily exhausting and economically ruinous for the Russian occupiers.

And so, the best thing both for Russia and Ukraine, and for the world is for this misbegotten venture to be halted and reversed as fast as possible.

And with every day and every hour that goes by that amazing Ukrainian resistance is helping to solidify and unite the rest of the world and if anything, western unity, and determination is growing stronger.

Dozens of nations have rejected the easy option of sitting on the side lines, or adopting a policy of calculated indifference, and instead, they have chosen instead to take a stand, consciously risking retaliation from the Kremlin.

They understand the stakes:

They know that if Putin succeeds in trampling Ukraine, his imperial ambitions would not end at that country’s borders.

They know that the outcome would be a world where aggression has triumphed, where might is right and extreme violence pays off and no nation would be safe.

And they know that Putin’s aim is to overthrow the post-Cold War order and destroy the vision of a Europe whole and free.

The draft treaty he published in December would once again impose a Russian veto on the foreign and defence policies of a dozen or more nations at the heart of our continent, including Poland, and that is something the UK and our allies could never accept.

And it is because of the implications of what is happening in Ukraine as well as the sheer horror that the UK has worked side-by-side with the European Union and the United States to devise the biggest package of sanctions ever imposed on Russia and one of biggest packages of sanctions of all time.

And I’m grateful for the determination of President Biden and President Ursula von der Leyen. Our efforts have intensified to the point where the rouble virtually collapsed yesterday, even though Russia’s central bank doubled its interest rates.

Now we will do more with our friends to exclude Russian banks from the SWIFT system, freeze their assets and restrict trade, and we will go further in our efforts to sanction those who are close to the Putin regime.

We are now taking further steps to whip aside the veil of anonymity and freeze their assets.

But I must emphasise that we are not motivated by any hostility towards the Russia or Russians: quite the reverse.

All our hearts ache for the Russian soldiers sent to die in this futile venture: we all grieve with their parents.

Only a few weeks ago, four weeks ago, I visited St Sophia’s cathedral in Kyiv, which has survived every invader since Yaroslav the Wise built its granite walls nearly a thousand years ago, it’s modelled on Hagia Sophia in Constantinople which was then the capital of Christendom.

How tragic, how incredible, how inexplicable, that the cradle of Slavic civilisation and Eastern Orthodoxy, should now be within range of Russian guns.

As I speak, a column of tanks and armoured vehicles 25 miles long is grinding south towards the golden domes of this ancient European capital - a city of nearly 3 million innocent people who have done nothing to deserve the carnage that Putin is unleashing on their country.

No wonder the Kremlin-controlled media refuses to tell the Russian people that their soldiers are attacking Kyiv.

No wonder that they spin a tissue of lies and claim that Russia is merely conducting a “special operation in the Donbas”.

Russia is a great country and civilisation, and we will never forget her sacrifice in the struggle against fascism, side by side with ourselves.

We must emphasise every day that it is Putin’s regime which is exacting from its own people an unacceptable cost for an unnecessary war – a war of choice - that should end as soon as possible.

And to ensure that Putin’s venture in Ukraine fails we must get over that key point, that this is not Russia’s war, not the Russian people’s war, this is Putin’s war and that has been increasingly obvious from everything he has said and written in the last year.

The UK, our government, first considered sending weapons to our Ukrainian friends because we read Putin’s semi-mystical essay on the future of Ukraine, amounting to a manifesto for imperial expansion.

That’s why in January we sent 2,000 anti-tank missiles, and now more than 25 nations are prepared to send defensive lethal aid, in support of the principle of a country’s right to protect itself.

I thank Chancellor Scholz of Germany for his speech which I believe was of world historical significance. We should recognise the gravity of Germany’s latest decisions, which have arisen from Putin’s aggression.

When I spoke to President Biden and fellow leaders last night, we focused on the humanitarian emergency that is now beginning.

Putin’s invasion has already forced hundreds of thousands of people to flee their homes and we must prepare for an even larger outflow, perhaps numbered in the millions.

Poland has already welcomed many thousands of refugees with compassion and practical help, and the UK will provide up to £220 million of emergency and humanitarian aid for Ukraine and I have placed 1,000 troops on stand-by to help the humanitarian response in neighbouring countries, including in Poland.

Many people in Britain will of course want to help Ukrainian refugees. So, we will make it easier for Ukrainians already living in the UK to bring their relatives to our country, and though the numbers are hard to calculate they could be more than 200,000.

And if the worst happens, and President Zelenskyy’s government is no longer able to function in Kyiv, we must prepare to support them whatever happens in the weeks ahead.

And we should recognise that this crisis will impose costs on ourselves and our electorates, that sanctions have consequences for us as well as for Russia, and no step is free of risk.

And whatever the difficulties ahead, and they may be considerable, this is now the moment for Europe to do something that is long overdue, and this is to finally wean ourselves off of Russian oil and gas and in the long term to reduce our reliance on fossil fuels from any source at all.

All of us must proceed with wisdom, care, and moderation: we have a duty to ensure that this crisis does not spread any further.

But if we are to have any chance of ending this nightmare, then Putin must understand that his savagery will be met with unrelenting economic pressure and that the west will be united in supporting Ukraine and that we are ready for a prolonged crisis.

I have no doubt that if the West can maintain the extraordinary unity we have shown so far, if we can press ahead with the strategy we have set out – of international economic, humanitarian, and diplomatic assistance to Ukraine, along with defensive weapons - then Putin’s venture will ultimately fail.

The path ahead will require patience and resolve, and we must be rational in our response – and recognise that Russia is capable both of misunderstanding and misrepresenting what we say.

And I will not waver in my conviction that, however long it takes, a sovereign and independent Ukraine will emerge once again, because Putin has stubbed his toe and tripped on a giant and immovable fact:

Which is no matter how many troops and tanks he sends, the Ukrainians desire to live in freedom in an independent country – which something that Poles will immediately understand - and in this desire the UK will always give them our wholehearted support.

And in the face of that fact and the unquenchable and manifest will of the Ukrainians to resist and in the face of this gathering tragedy, I say to Vladimir Putin and his regime, that there is only one way out of this morass and that is to stop the tanks, to turn back the tanks on their way to Kyiv, turn them round and take the path of peace.

Thank you all very much.