The government has launched a consultation on domestic abuse, seeking new laws and stronger powers to protect and support survivors 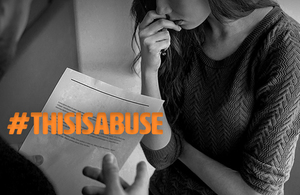 Domestic abuse comes in many forms, shattering the lives of victims and their families, and in recognition of this the government has put forward proposals for new laws which would transform our approach to this terrible crime.

The consultation launched today (Thursday 8 March) by the Prime Minister Theresa May, Home Secretary Amber Rudd and Justice Secretary David Gauke, will seek views on measures to be included in the government’s draft Domestic Abuse Bill.

To ensure we get this landmark legislation right we now want to hear from all those who have been affected by abuse, from survivors, frontline professionals, charities and the public, to gather views on how, together, we can best put a stop to it once and for all.

Our tough new approach includes new Domestic Abuse Protection Orders to better shield victims against further abuse by enabling courts to impose a range of conditions on abusers. These could be compulsory alcohol treatment, attending a programme to address their underlying attitudes or addictions, and using electronic tagging to monitor them. Under the proposals, breaching the order would become a criminal offence.

We have also proposed the creation of a statutory aggravating factor in sentencing, similar to those already in law for hate crimes, for domestic abuse to toughen sentences when it involves or affects a child, and the creation of a Domestic Abuse Commissioner to hold the government to account. Economic abuse will be recognised for the first time as a type of domestic abuse, covering controlling circumstances in which victims have finances withheld, are denied access to employment or transport, or are forced to take out loans and enter into other financial contracts. Our recognition will improve understanding among frontline professionals, law enforcement officers and prosecutors so we can take action more quickly and effectively to better support victims.

"This year we celebrated the centenary of achieving votes for women in this country, and today we recognise International Women’s Day. But while we have made great strides towards equality and opportunities for women, the fact there are still thousands of people suffering from domestic abuse shows how much work we still have to do.

"Domestic abuse takes many forms, from physical and sexual abuse, to controlling and coercive behaviour that isolates victims from their families and has long-term, shattering impacts on their children. The consultation we are launching today includes a number of proposals which have the potential to completely transform the way we tackle domestic abuse, providing better protection to victims and bringing more perpetrators to justice.

"We know that domestic abuse affects those from all walks of life. Victims can be young and old, male and female, and I hope as many people as possible will come forward to give us their views and share their experiences, as we seek to put an end to this abhorrent crime for good."

"It is appalling that in twenty-first century Britain, nearly 2 million people every year – the majority of them women – suffer abuse at the hands of those closest to them.

"Through this Bill I want to fundamentally change the way we as a country think about domestic abuse, recognising that it is a crime that comes in many forms – physical, emotional, economic. This is about creating a society that protects individuals and families at the earliest opportunity, before such abuse has a chance to escalate.

"This is a once in a generation opportunity to transform our entire approach to this terrible crime. I call on everyone, but especially those who have suffered abuse in any form, to speak out and help shape the way we approach this crime for years to come."

"The damage caused by domestic abuse can last a lifetime. We have a duty not only to support those affected but to prevent others falling victim in future.

"We continue to improve the way domestic abuse is dealt with throughout the justice system, but there is undoubtedly more we can do.

"By proposing to give courts greater powers, from a new protection order to tougher sentences, we are sending a clear message that domestic abuse in any form will not be tolerated."

As part of the consultation the government will also be seeking views on how to allocate some of the £20m funding announced last year.

Studies have shown that adults who as a child witnessed domestic abuse are far more likely to experience abuse by a partner as an adult, and so an £8 million fund will be allocated to support children who witness domestic abuse, and help with their recovery through locally commissioned projects.

Meanwhile £2 million will be dedicated to supporting female offenders who have been victims, as over 60 per cent have indicated they have experienced domestic abuse.

As part of these important initiatives designed to make tackling domestic abuse everybody’s business, £2 million will be used to extend a healthcare pathfinder pilot across further hospital trusts and help direct domestic abuse victims to the full range of services they need.

This government is also completely committed to developing a sustainable funding model for refuges, and to ensuring that there is no postcode lottery when it comes to provision across the country. That is why we are reviewing the way in which refuges and supported housing are delivered.

We have heard the need for sustainable funding for refuges which is why we asked all the charities and organisations working on the frontline to feed in their expertise and come forward with their ideas as to how best to deliver this on the ground. That process is ongoing – and we have been clear no options are off the table as we work with them to ensure women requiring support in their time of need are not let down.

Yesterday changes also came into effect making it easier for the estimated 12,000 survivors of domestic abuse living in refuges to register to vote anonymously. They will now be able to register to vote without their name and address appearing on the electoral roll, and without the fear of their former partners finding their address.

"This is a true opportunity to have a national conversation about how to end domestic abuse, for good. We are ambitious for women and girls - we want every single one to be able to live safely at home and in their own relationships.

"We welcome the focus on the urgent need to hold perpetrators to account and to prioritise the needs and safety of women and girls. The time for piecemeal sticking plasters is over, we need radical change, and we will stand side-by-side with survivors to make this happen."

"We are delighted that the government is marking International Women’s Day by launching the consultation on the landmark Domestic Abuse Bill. We want to make sure that the Bill makes a real difference to the lives of survivors of domestic abuse. We will be working with survivors, members who deliver life-saving domestic abuse services and the wider violence against women and girls sector to ensure that the law, policy and practice makes domestic abuse everyone’s business. We want to see the Bill encompass and go beyond changes to the criminal justice system to include policies on housing, education, health, immigration and the welfare system to name but a few, to ensure that every survivor and her child can safely escape domestic abuse."

The consultation will also seek views on legislation, as well as other steps that can be taken to tackle the harms caused by domestic abuse and support victims and survivors to rebuild their lives. These include:

• Potential for the Domestic Violence Disclosure Scheme, known as Clare’s Law, to be enshrined in legislation. This allows police to disclose information about previous violent offending by a new or existing partner and build better protection for victims, and has already been rolled out operationally across the country.

• Proposals to give domestic abuse victims the same status in court as those who have suffered modern slavery or sex offences, so that they would be automatically eligible for the range of special measures available in criminal proceedings, such as giving evidence behind a screen or via video link.

"Refuge applauds the intentions of the government to put survivors at the heart of its efforts to stamp out domestic abuse.

"We have worked closely with the government up to this point and look forward to continuing to do so, especially on a new national model for refuges. It is very welcome news that the government has announced its commitment to sustainable refuge funding alongside the launch of the consultation.

"As the largest provider of refuges, supporting more than 6,000 women and children a day across our services, we believe that guaranteeing the life-saving and life-changing services needed by victims of domestic abuse will go a long way towards protecting and supporting the people at the very heart of the proposed Bill."

"This is a once in a generation opportunity to create a step-change in how we deal with domestic abuse. I look forward to reading the consultation and hope to see every strand focus on the needs of survivors and their children, and the creation of safe, effective responses to perpetrators."