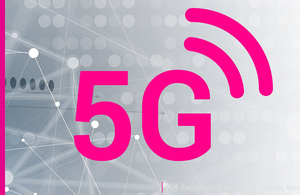 Spectrum is the airwaves over which televisions, mobile phones, tablets, radios and other devices communicate. Clearing a portion of the spectrum in the 700MHz frequency means that new data capacity is released for mobile operators.

Data use is only set to grow as 5G, the next generation of mobile connectivity, becomes more available and is used for an increasing array of new services and applications.

Now that 20 million homes have successfully re-tuned their TV equipment to continue to receive their TV channels on lower frequencies the 700MHz band is exclusively available for mobile use.

This will allow mobile operators and other innovative companies to use 5G to develop new high data usage technologies and services to boost sectors such as manufacturing, transport and healthcare.

The low frequency of the 700MHz spectrum band is ideal for carrying mobile signals into buildings and over long distances – including the countryside. The clearance will increase capacity in today’s 4G networks helping level up rural communities with greater mobile coverage, reach, and reliability.

Releasing these airwaves will help increase the total amount of the radio spectrum available for mobile services in the UK by nearly a fifth (18%).

"The smooth and successful completion of this massive infrastructure project ahead of schedule and under budget is a huge testament to the collaborative efforts of our partners.

"We have overseen a quiet revolution in the airwaves which will lead to better mobile coverage for rural communities and unlock new ways for 5G to boost business productivity and improve people’s lives."

This saw changes made to more than 1,200 television transmitter sites in some of the farthest flung reaches and on top of some of the tallest structures in the country.

In many cases it involved engineers physically replacing antennas at the top of masts. The antennas can weigh around six tonnes and lifting them involved significant engineering feats using cranes, and sometimes special ‘Heli-Lift’ helicopters.

Works included building a new temporary mast to stand alongside the iconic Emley Moor Tower in Yorkshire, which is taller than the Shard. At 1,040ft (317m), the temporary mast alone stood as Britain’s seventh tallest structure.

The last part of the infrastructure works took place at Kendal and on the Isle of Man on 19 August where channels were switched to the new frequencies in the last of 57 ‘clearance events’.

"This is a major milestone for improving mobile services across the UK. It’s been possible thanks to the meticulous planning and hard work from a range of organisations – all working together to make sure this huge project ran smoothly and minimising any disruption to TV viewers. The airwaves will now be available to use immediately after our upcoming spectrum auction, bringing better mobile and innovative new services a significant step closer."

"The 700MHz programme is the largest broadcast engineering project since the digital switchover, and has been described as ‘performing open heart surgery’ on the nation’s television network. Around 20 million UK households enjoy Freeview services so a key requirement for this project was that the vast majority of them wouldn’t even know it was happening. The team has performed brilliantly, and the organisation behind making sure each step was completed in the correct order was phenomenal.

"Recent events have underlined the importance of television in providing people with news, entertainment and connections to the wider world. I’m incredibly proud of our team that, alongside this clearance programme, has continued to support Freeview by maintaining the network that broadcasts its signals into homes every minute of the day."

"We’re pleased to have helped coordinate these required changes to the 700MHz spectrum band with Government and our broadcast partners, and have worked closely with Digital Mobile Spectrum Ltd to support Freeview viewers though the programme and ensure they can continue to enjoy free-to-air television."

TV sets in 17.8 million homes were re-tuned to continue to receive their TV channels on lower frequencies, with 99% of viewers able to re-tune their TV’s themselves. Only 1% of viewers needed free support from the Freeview Advice Line, and only 0.1% required home visits from engineers to get them re-tuned - in some cases even having their TV aerial re-aligned or replaced free of charge.

The programme, which was funded by DCMS, was estimated for completion at the end of 2021 at a cost of £400 million. Its completion in August 2020 at a cost of under £350 million represents a Government Major Portfolio Programme completing ahead of schedule and significantly under budget.

Ofcom, which has a duty to ensure the UK’s spectrum is used efficiently, will be releasing 80 MHz of these important airwaves for mobile companies to use at an auction expected to take place in January 2021.

To help maintain strong competition in the UK mobile market, it will impose a 37% cap on the overall spectrum that any one mobile company can hold following the auction.