Forces given funding boost to increase roll out of Hotspot Policing

Police forces are to be given extra money to tackle violent crime this autumn using intensive, high-visibility police patrols 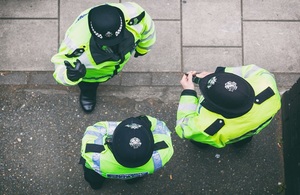 18 police forces across England and Wales will receive a share of an additional £4.12 million to increase Hotspot Policing in towns and cities blighted by violent crime.

Developed by Essex Police, the tactic involves operating regular, intensive, high-visibility police foot patrols for short periods of time within specific areas where there is a risk of serious violence. Police data analysis will inform which areas are most at risk of violent crime and where the patrols should be targeted.

First piloted in Southend-on-Sea in 2020, the tactic resulted in a 73.5% drop in violent crime and 31.9% fall in street crime in the 20 highest crime hot spots on days when patrols visited, compared with days they did not. Other trials have shown similar results - a recent hot spot operation by Bedfordshire Police across 21 hot spot neighbourhoods saw harm from serious violence drop by 44% on patrol days.

Following the success of these pilots, 18 police forces in England and Wales most affected by serious violence at the time of the programme’s inception in 2019 will be given the funding boost to roll out Hotspot Policing in targeted high-crime areas to help keep communities safer.

"The government is working hard to confront violence in all its forms and make neighbourhoods safe.

"That is what our smart new approach to Hotspot Policing does and I am delighted to see the tactic is already reducing high harm crime in some areas and look forward to this success being replicated in other towns and cities across the country."

"We’re continuing to see results from Hotspot Policing, and I’m thrilled it’s been rolled out across the country.

"This is simply police doing high-visibility policing. It’s nothing new, but it does get results. I’m thrilled that police forces across the country are being given extra funds to continue this approach.

"We’re committed to tackling violent crime in Essex, and we know that one of the main factors of this type of crime in our county is the sale of drugs and the impact that has on our communities. Our Op Raptor teams, which tackle street and drugs gangs, made 272 arrests in the first 6 months of 2021, and we’ll continue to arrest the perpetrators of these cowardly, destructive crimes."

The Home Office have also provisionally allocated £780,000 of one-off funding to support 2 force areas – Cleveland and Humberside – affected by serious violence but not currently in receipt of Grip funding.

Altogether the government has invested over £242 million from 2019-22 to address the drivers of serious violence and significantly bolster the response of the 18 police forces.

"The damage caused to lives, particularly young ones, by violence is incredibly serious and tackling this issue is a priority for policing across the country.

"There is good evidence that when done effectively, hotspot patrols can have a sustained impact on violence reduction. This additional funding is greatly welcomed as it will build on our understanding of what works.

"The Hotspots strategy, in combination with the partnerships police have formed with violence reduction units, shows our commitment to supporting communities and our young people in the prevention of serious youth violence."

Unveiled in July, the plan builds on progress to date toughening sentences to keep the most dangerous offenders behind bars and deliver almost half of the 20,000 extra police officers promised by 2023.

It will ensure the public is better protected across all parts of the country, with each neighbourhood having contactable, named police officers, who know their area and are best placed to ensure that persistent crime and anti-social behaviour is tackled.