The project will make sure that concrete roads are safer, quieter and easier to maintain for the future 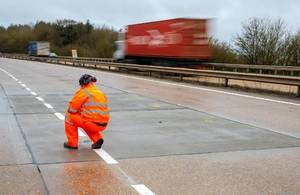 Highways England has announced two contracts worth £285 million to upgrade the concrete surface of roads across the country.

Concrete roads make up almost 400 miles (4%) of England’s motorway and major A-road network. Mostly found along the eastern side of the country, in the North East, Yorkshire, East Anglia and the South East, there are also some smaller stretches in other parts of England.

They were built largely in the 1960s and 1970s, at the time of the Swinging Sixties and when The Beatles were at their peak. Traffic volumes were half of what they are today, colour TV was only just beginning, and mass ownership of mobile phones was still more than 20 years away.

Over the next five years, Highways England will work with leading engineering and construction companies Morgan Sindall Infrastructure, John Sisk & Son, VolkerFitzpatrick, Colas Ltd, Dyer & Butler and Tarmac on a long-term programme to repair or replace the concrete surface of motorways or major A roads in England.

The programme is part of Highways England’s nationwide drive to revitalise concrete roads in England. Up to £400 million will be invested over the next five years to 2025. This is part of our commitment the Government’s second Road Investment Strategy published last year to maintain and renew the strategic road network.

"Concrete roads have served the country well since they were first built half a century ago. They have proved tough and durable over the years, helping every day for work journeys and home deliveries, visits to friends and family, holidays, and the movement of the goods and services that we all depend on.

"This is the biggest concrete road renewals programme we have ever embarked on and we’re pleased to have awarded the final two contracts that will help us deliver the maximum benefits of safe, reliable and smooth journeys for many years to come."

"Today’s news is fantastic for motorists across the country, bringing thousands of drivers a step closer to smoother and more reliable journeys

"This huge renewals programme, which is part of our £27 billion investment in the country’s roads, will help ensure the nation’s road network is fit for the future."

Despite providing fifty years of virtually maintenance free life, decades of use and hundreds of millions of journeys has left these roads in need of vital upgrades.

Depending on the condition of the roads, some will be repaired to extend their life and others will be fully replaced. Resurfaced roads will be quieter, smoother, be easier to maintain and therefore safer.

The programme also includes plans to work with our contractors to recycle and reuse materials wherever possible and a Centre of Excellence has been established to coordinate innovative ways of renewing these vital roads.

The two contracts awarded today are:

• Reconstruction Framework worth £218 million, which will see Morgan Sindall Infrastructure and John Sisk & Son on a design and build arrangement to demolish existing concrete road surfaces that are in poor condition and replace with a new smoother surface.

• Lifecycle Extension Works Framework worth £67 million, which will see VolkerFitzpatrick, Colas Ltd, Dyer & Butler and Tarmac deliver specialist repairs to maximise the life of the existing concrete road surfaces of motorways and major A roads.

The first of the contracts to revitalise concrete road surfaces was awarded earlier this year to infrastructure and engineering companies AECOM and Atkins. The £39 million Design Framework will see the companies provide design, supervision and project management services.

Throughout the life of the programme, Highways England will seek to minimise the disruption to road users, local communities and business. All plans will be coordinated with other roadworks with alternative or diversion routes available when needed, which will help drivers plan their journeys in advance.

In the past year Highways England have successfully extended the life of short sections of the A11, A12 and A14 and are using the lessons learnt from these projects to inform this new programme. This includes extending the life of more sections of the A12 and A11 this summer and major works being carried out on the A11 in the autumn.

"We are very pleased to be appointed by Highways England to deliver the Lifecycle Extension Works Framework. Our team will be on hand to deliver specialist repair and improvement works across England’s motorways and major A roads."

"We are delighted to have been awarded a place on the Reconstruction Framework which continues our long-standing relationship with Highways England. The framework builds upon our existing portfolio of work with them including the Collaborative Delivery Framework, Smart Motorways Alliance Framework and several major schemes."

"We are thrilled to be selected by Highways England for this significant programme of concrete road renewals. This is a very exciting framework and an opportunity to collaboratively deliver a safe, efficient, innovative solutions to replace the concrete roads. We are also looking forward to working with Highways England to deliver the social value and local legacy benefits of these projects."

"We’re proud to be awarded a place on the Lifecycle Extension Works Framework which is testament to the expertise of our people, alongside an outstanding track record of technical innovation and efficient project delivery. We look forward to building on our long-standing relationship with Highways England, drawing on our capabilities to deliver high-quality, robust upgrade activity with minimum impact to the travelling public."

"It’s a great honour for Colas to be part of this prestigious program. Through the Lifecycle Extension Works Framework, the Colas group expertise will be used to propose efficient and innovative solutions. We will work collaboratively with Highways England and its partners to deliver projects to the highest standard of Quality and safety providing value for customers and minimising carbon impact on the environment."

"Dyer & Butler is delighted to have been awarded multiple Lots on the Lifecycle Extension Works Framework. We look forward to supporting Highways England maintain their national concrete roads asset and improve the journeys of their customers. We will be combining our experience gained on the Highways England Construction Works Frameworks with transferable concrete technologies from our aviation sector to deliver effective repair solutions."