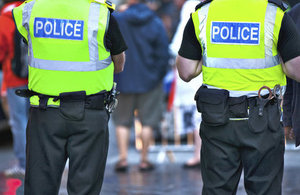 Home Secretary Priti Patel has today (Friday 17 January) backed police to step up their fight against county lines gangs as she welcomed the results of a recent crackdown.

British Transport Police (BTP) and Merseyside Police have made over 100 arrests during intensive operations that have taken place in the past 2 months.

Officers have also made a number of seizures of weapons, phones, drugs and cash.

This action was funded by £5 million of Home Office money from £20 million that was previously committed by the Home Secretary to dismantle county lines.

Police continue to carry out surge activity against county lines gangs, and following the success of recent operations the Home Secretary has committed an additional £5 million funding on top of the original £20 million.

"I will not tolerate these abhorrent gangs that are terrorising our towns and exploiting our children.

"I’m pleased to see such strong results from the police – they have my full backing in this crucial work.

"We will continue to support their efforts in confronting this threat with 20,000 new officers."

"In the last 2 months the concentrated activity of our officers, working together with British Transport Police and other forces in the UK, has led to the cutting of 7 county lines run by organised crime groups.

"As a result we have arrested 48 people and more importantly we have been able to safeguard 21 people who were being exploited by these groups.

"County lines are run off the backs of vulnerable people targeted by ruthless criminals. They use the vulnerable to deal their drugs, whilst they sit back and live off the criminal earnings from the sales of illegal drugs which blight our communities.

"This initiative, codenamed Project Medusa, hits the criminals hard, but when it comes to the young and vulnerable people, who have been criminally exploited, we ensure that they are treated sensitively and with understanding."

"We are the specialist force for policing the rail network and my officers have great experience in tackling issues which span the nation, such as county lines.

"We have seen first hand the devastating impact these exploitative gangs have on young people, and we are determined to disrupt this criminal activity.

"Since the founding of the county lines taskforce we have seen excellent results, with 80 gang members being arrested and drugs and other potential lethal weapons being seized.

"With each arrest comes valuable intelligence on how these corrosive gangs operate, and likewise we can help safeguard exploited children from harm.

"Thankfully, the rail network continues to be a low crime environment, and with this Home Office funding, we will continue to take decisive action to shut down trafficking networks."

Following the government investment, the 2 forces have intensified their efforts to tackle county lines.

Since it was set up last year a dedicated BTP taskforce has carried out several operations resulting in 80 arrests. Officers have also made 35 drug seizures and seized 11 weapons, cash totalling nearly £20,000 and 78 phones.

Merseyside Police has made 48 arrests and closed down 7 lines, while also seizing drugs and cash worth over £100,000.

Activity has also taken place in 2 other pilot areas.

Today (Friday 17 January) the Home Secretary joined Merseyside Police as they executed a number of county lines raids in a joint operation with North Wales Police. Warrants were executed simultaneously in Merseyside and North Wales.

The government will continue to bolster law enforcement to tackle county lines.

The National County Lines Co-ordination Centre is ensuring more intelligence is shared between forces and police are targeting dirty money.

Since it opened over a year ago, the centre has co-ordinated action which led to over 2,500 arrests and has safeguarded over 3,000 vulnerable people.

In addition, money has been invested in new automatic number plate recognition technology which will enable police to target cars that are being used in county lines activity, as roads are often used to transport offenders, victims, drugs, cash and weapons.