Boost for Teesside with new direct trains from Middlesbrough to London

Running Monday to Friday in each direction, the new service will connect with London King’s Cross in around 3 hours 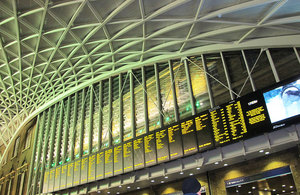 A new direct train service between Middlesbrough and London launches today (Monday 13 December) for the first time in 31 years, in a huge boost for the North East.

The daily weekday service will drive opportunity in Teesside, providing better connections for workers and a major lift for tourism. It follows on from the government’s pledge to invest £96 billion in the railways to help level up the nation.

Running Monday to Friday in each direction, the new service will also connect nearby Thornaby directly with London King’s Cross in around 3 hours.

The first train will depart Middlesbrough at 07:08 this morning and will arrive at London’s King’s Cross at 10:22.

"The railways are the backbone of this country, and I’m delighted we’re establishing a direct service between Middlesbrough and London for the first time in more than 3 decades.

"Not only will this world-class service provide green benefits, but it will also give the people of Teesside better connections for work, help bring loved ones together, and drive tourism to this fantastic region.

"This follows our ambitious Integrated Rail Plan which is building a better rail network that benefits everyone."

Run by London North Eastern Railway (LNER), the service will see passengers travel on the world-class Azuma trains which offer huge environmental benefits, running on electric wires between London and North Yorkshire, before switching to diesel to Middlesbrough. They also boast free onboard wi-fi, electric sockets at every seat and more space than conventional carriages.

Families will also be able to travel on a special Family Ticket offering around a 48% discount and a strong incentive to ditch their cars for greener public transport.

The Middlesbrough to London service is part of a new timetable designed to help the network build back better from the pandemic. It also delivers improved value for money for taxpayers with rail services adjusted to meet changes in passenger demand.

As well as the introduction of a direct London-Middlesbrough service, the new timetable will also see improvements on journeys between Harrogate and York and between Newcastle and Edinburgh.

Train operator Northern is adding more services, increasing the York-Harrogate service to half hourly from hourly. A new service of 5 trains per day between Newcastle and Edinburgh is also being introduced by TPE for Transport Scotland, serving Northumberland and the Scottish Borders.

Last month the government announced £96 billion for the biggest ever public investment in Britain’s rail network. Journeys across HS2 and Northern Powerhouse Rail, both from London and across the Pennines, will be faster, more frequent and reliable under the government’s Integrated Rail Plan over the next couple of decades – including shorter journeys between Leeds and Manchester, Nottingham and Birmingham, and London and Sheffield.

Just last week, it was also announced that Britain’s new generation of super-fast ‘bullet trains’ will be designed and built here in the UK, promising massive investment in the North East and Midlands and 2,500 new jobs.