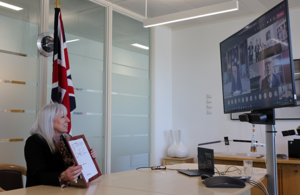 The world’s first Space Bridge will unlock improved access to trade, investment and academic research opportunities, better advice to businesses and innovative bilateral collaborations. The UK and Australia share future ambitions for space and have similar plans to increase the size and job creation potential of the sector. This agreement will further develop the longstanding relationship between the two countries which dates back to the 1970s when the Prospero satellite built in Farnborough, UK, launched from Woomera, South Australia.

The arrangement enhances cooperation between the UK Space Agency, UK Department for International Trade, Australian Trade & Investment Commission, and the Australian Space Agency, coordinating opportunities for the UK and Australian governments and companies to work on space-related activities, including sharing Earth Observation data to collaborating on robotic and artificial intelligence.

"The signing of today’s Space Bridge partnership, a world’s first, with one of our closet international allies, is another step forward in our ambition for the UK to become a globally-competitive space power.

"The bond will allow our most innovative space businesses and universities to collaborate and share best practice more effectively than ever. I’m excited to see how this partnership will unlock new space jobs in both countries while driving forward new ideas that could enrich all of our lives."

"Space exports hit £5.5 billion in 2017 and it is this international demand for our space goods and services which is driving the development of the UK’s vibrant and innovative space industry.

"Like the UK, Australia recognises the enormous potential of space science and recognises that closer partnership and alignment between our two sectors can boost progress and jobs in both countries. I believe that UK exports to Australia could grow by £900 million as a result of a Free-Trade Agreement and the Space Bridge programme can play a critical role in space contributing to this growth, and further strengthening our UK-Australia relationship."

The UK boasts strong Foreign Direct Investment levels into its space sector and the Australian space sector reports a strong appetite to expand operations into the UK. Leaders for Australia and UK’s space agencies recognise the importance of stronger space ties between both countries, as the UK ramps up plans to become a leading global player in space.

The announcement comes as the UK and Australia begin the fourth round of negotiations on the Free Trade Agreement this week. We have already made good progress in several chapter areas including digital, telecommunications, customs, rules of origin, and procurement in previous rounds.

Australia is influential in the Indo-Pacific and a Free-Trade Agreement will help us pivot towards this dynamic area of the world. This will help diversify our trade, make our supply chains more resilient, and make the UK less vulnerable to political and economic shocks.

"As the UK extends its ambitions in space, it’s only right that we forge new and stronger alliances with new and existing partners all across the globe.

"This agreement has the potential to unleash innovation, promote knowledge exchange and build relationships that will help both the UK and Australia maximise the vast economic and scientific potential that the space sector offers. It will help create better opportunities and greater security for people in both nations."

"The Space Bridge Framework Arrangement will help propel the Australian civil space industry into its next phase of growth, opening doors to build local capability, as well as significantly boost our collaboration with the UK Space Agency."

The Space Bridge Framework Arrangement was signed on Tuesday, 23 February 2021 at the British High Commissioner’s residence in Canberra, Australia, and at Westminster, in London, United Kingdom.